Fighting the Good Fight – or not …

Our New York newspaper in April 1977

The following is excerpted and adapted from an entry in my diary for 4 July 2010:

… I have connected with many mostly American church members [= the Unification Church / Movement founded by the late Korean Rev. Sun Myung Moon] on Facebook. Some are old colleagues from my time in the USA (1975-1982).

It is almost frightening to see how fanatic and narrow-minded most of them are [in a political sense only; I know the vast majority are really good people in other ways] — from my point of view. When I was in the US, especially during the time (end-1976-1982) I was with the News World (New York daily newspaper launched by members of that church/movement — a forerunner of the Washington Times) and Free Press International, we had the feeling that we were in a war against communism. It was an intense ideological conflict from our point of view, whose seriousness and dangers most people outside our political community within the church failed to understand/appreciate.

We needed allies, like-minded people who were also movers and shakers in the political world of the USA, and in other countries, too. The USA was — to us — by far the most important country in the world, and we had to save her from the decadence and depravity that the leftists and communists propagated and encouraged in order to weaken and finally conquer her. America had to become the world’s greatest power by being both morally superior and much better armed and motivated — politically and militarily — than any potential foe or group of foes.

And there were always foes: evil empires (Reagan was our hero as president — even though Moon was jailed for a year and a half on his watch, for tax evasion), terrorists, etc. There was a sense of moral superiority, but our morality did not extend to the point where we would have disapproved of mass murder as long as those murdered were — or could be labeled as —  communists or leftists. It was thus quite alright for the US to have bombed Vietnam with napalm and Agent Orange or for Argentine, Chilean and Colombian generals to massacre thousands of suspected leftists and sympathizers. It was fine for death squads to torture and murder thousands in places like Colombia, Brazil or El Salvador — and many others — as long as the death squads could be somehow labeled pro-USA (mostly meaning fascist/oligarchist) and their victims leftist.

I was never enthusiastic about this but mostly played along, because, after all, I believed in Moon, his church, his mission and the importance of the USA in fulfilling this mission.

Today, of course, I stand more or less at 180 degrees to all that.

I feel the church has played a very nefarious political role in the USA by going to bed with narrow-minded, fanatic nationalist, elitist/oligarchic and militaristic politicians, and doing its utmost to promote causes such as those of the worst fascists. The idea from the church’s and also Moon’s point of view — of course — was always that those were people who were on God’s side in the larger scheme of things. They were people who had power, who could perhaps be won over to completely support the work of Moon — the Messiah — and ultimately turn the whole country around so that Moon would be recognized for who he really was. The USA would become — so the American members (we) hoped — the first country to officially recognize and follow the “king of kings.”

Today, I see on Facebook and elsewhere that American members seem not to have changed at all — not to have learned anything new at all. They are still fighting an intense ideological fight against the political “left” [and socialism  / communism] and the Islamic (primarily) “terrorists” [real and imagined] — and they still believe the USA is not armed well enough — both ideologically/morally and militarily — to fight its enemies.

What I don’t understand is how powerful this — to me, mythical, but to them very real — Satan and his legions still are. I thought Moon had conquered and subdued him [according to his own words], and Moon’s sons in spirit world were completely turning that realm upside down. How come, then, that this so-called Satan and his minions still have so much power that the world continues to be the mess it is — and spirit world seems in no better shape?

I have my own answer, of course, and I don’t believe in a spirit world as the Moonies describe it at all. To me, God has created and always played both sides, and we humans are very much part of both sides — “good” and “evil,” just as we are part of God [in essence I believe we humans, collectively, are a spearhead of God’s own evolving consciousness, which grows through us — although as individuals we are just temporary existences and will dissolve back into the whole when our bodies die].

The so-called “Tree of Knowledge of Good and Evil” in the Bible — that very name says it all: to God, originally, there was no good or evil, there was no moral sense. God himself or rather itself (to take away the gender) only “discovered” a sense of “good” and “evil” through us humans. He/she/it “discovered” how useful (from its own larger perspective) and — yes — exciting it could be to divide us between “good” and “evil.”

MORE BELOW THE PICTURES 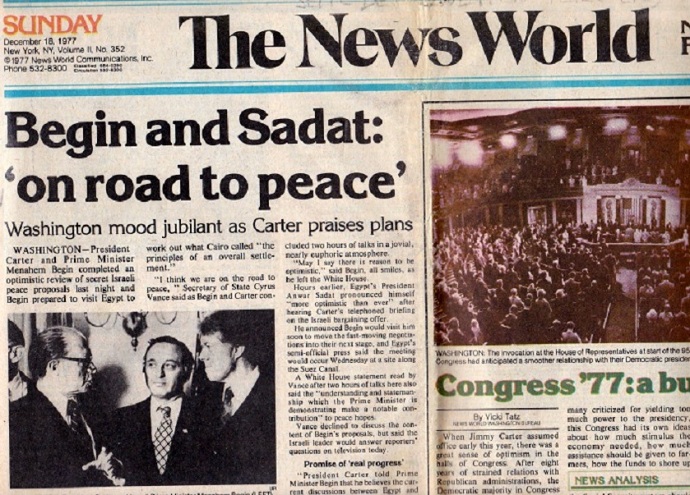 The News World in December 1977 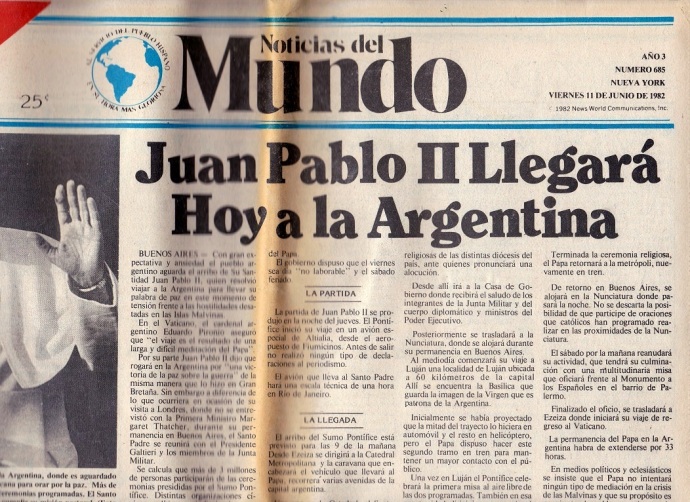 Diary entry Monday 7 March 2011: Yesterday 6 March was the 36th anniversary of my first journey to the USA, which lasted 4 years and 4 months (52 months) and became the start of a new life for me in many ways.

Today I ask myself: Do I want to live/exist forever? I have pondered this question before, of course. The answer in recent years has always been: No. … And today it is not only no but hell, no!

I do not want to live forever.

Following up on what I wrote in my last entry: No, I don’t want to live/exist forever.
I feel it is perfectly normal for all of us humans and everything else in this Universe to exist only for a certain period of time. We continue to exist only indirectly, through others we have touched in our lives and in the universal memory – God – which is borne by all that exists

In the last year or so I have felt that the end of my life on earth is approaching fast. It could be just an illusion like the many illusions I have felt in the past. But I don’t or can’t, somehow, feel that I still have a long life ahead of me. Another possibility is that a major chapter of my life is about to end and that there are dramatic changes afoot. – I don’t know.

— Certainly, the world as a whole needs some dramatic changes. — I feel that the nation which has long epitomized and driven change for the better, dreams of happiness, freedom, scientific/technological progress and many other things — the USA (my second homeland after Luxembourg) — has been going down a dangerous slippery slope of self-aggrandizement and self-glorification at the expense of others. It has built up awesome military forces and a powerful global intelligence and surveillance apparatus that have become — in my view — the greatest single threat to peace and freedom in the world.

Power always corrupts, because God itself, the ultimate power, is corrupt — in a way, since it has deceived us (-see my earlier diary entries on God, especially “The biggest lie” dated 11 July 2010 — open and scroll down here: On how my view of God has evolved ). Unchecked power is and has always been the most dangerous and nefarious thing. Of course, there is no absolute, totally unchecked power. Even God has limits — because he/it definitely has no existence outside or beyond this Universe (I don’t believe in “multiverses”).

But the greater the power of one (or more) over others in this world the greater the danger of misuse. This is what I feel the USA has been doing. It has taken 9/11 (the 11 Sep. 2001 tragedy blamed on “terrorists” that cost the lives of nearly 3,000 people when the World Trade Center’s “Twin Towers” in New York City collapsed) and the emotions unleashed in response to it as an opportunity to impose its military power on the world, doing its best to scare everyone into submission and killing, wounding and torturing hundreds of thousands of people in the name of fighting a “terrible” enemy it calls “terrorism.” No, this fight is not against terrorism, it is terrorism – by the USA, against anyone who opposes it or refuses to kowtow, to submit.

I also believe that Rev. Moon’s Washington Times and his other media outlets, as well as most of his other endeavors in the political arena, have contributed significantly to this state of affairs in the USA. He claims to be for peace but the results of his actions and speeches on the political level have helped to push the USA further down the dangerous slippery slope I mentioned, towards self-aggrandizement at the expense of others. In a way it is not surprising — because even though Rev. Moon makes an effort to sound humble from time to time, most of what he says and does is for the glorification of the invisible, intangible God, which ultimately reflects back only on himself and his family. It’s self-glorification, self-aggrandizement.

But he has been very mealy-mouthed when it comes to denouncing the massive crimes being committed by the USA and its “allies” in their so-called fight against “terrorism.” He has made mild statements calling for peace and said with reference to the fighting in Iraq (after the 2003 US invasion that triggered a virtual civil war) that this “savagery” needed to stop. Most American members clearly saw this as a call for the end of suicide bombings, primarily, that caused many civilian deaths — not for an end to US military operations there that snuffed out or destroyed the lives of many more people if you count the ones conveniently labeled “terrorists.”

Of course, Moon knows on which side his bread is buttered. He depends very much on the war-mongering neo-conservatives and other jingoists in the USA to keep his fame, his power and his family’s wealth. His American followers nearly all belong to that ilk, and the most important people who helped him to advance his cause are of that stripe.

I know (or rather I feel I know) that God has been supporting this, supporting the USA and Moon, because he always supports the powerful — at least until such time as he tires of his favorites and chooses others — because perhaps the only certainty in this world — God’s world and our world — is change. God changes, evolves, as he learns. Yes, I believe God learns, and he learns through us – through all beings at the highest levels of consciousness/intelligence.
…..

This site uses Akismet to reduce spam. Learn how your comment data is processed.